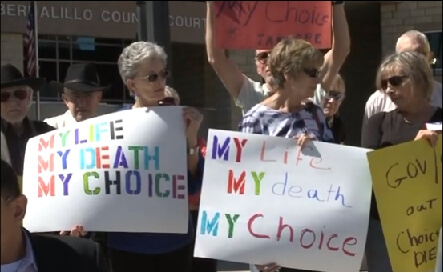 The trial is scheduled to begin Wednesday in state District Court in Albuquerque, New Mexico. In a lawsuit filed in March by the American Civil Liberties Union of New Mexico, the trial is a legal challenge to a decades-old New Mexico law that prohibits physicians from helping terminally ill patients. The law currently states that “whoever commits assisting suicide is guilty of a fourth-degree felony.”

ABC News reports that ACLU lawyers have stated the lawsuit asks the court to rule that doctors may give patients the option of ending their lives. According to the lawsuit, the New Mexico doctors seek to be allowed to prescribe medication to terminally-ill patients who want to end their lives.


A Santa Fe woman with advanced uterine cancer later joined two doctors in their legal challenge as well. When the lawsuit was first announced in March 2012, the District Attorney told News 13 she could not remember a case of assisted suicide involving a doctor being prosecuted in New Mexico, also adding that medical privacy laws would make those cases difficult to prosecute anyway.

The lawsuit seeks a clarification and a distinction that the statute not apply to doctors who write a prescription for medication that can help a dying patient end his or her life. The ACLU of New Mexico along with Compassion & Choices will argue their case in front of District Court Judge Nan Nash.

New Mexico could become the third state in the nation to let doctors help their terminally-ill patients end their lives by prescribing medication to end their suffering. As it stands, it is a felony to deliberately aid someone in taking their own life.