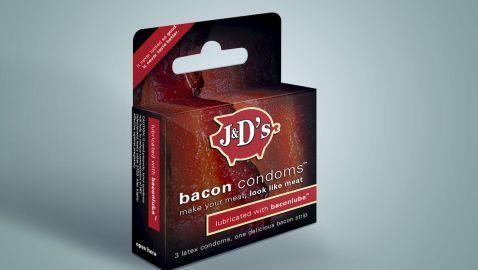 A Seattle company named J & D’s Foods is now selling pork-flavored condoms. It first began selling bacon lubricant. The bacon lubricant “began as an elaborate April Fool’s prank and was never intended to be a real product,” according to The Huffington Post.

The condoms are made from latex and they are coated with the company’s water-based lube. The co-founder of the company, Justin Esch, told The Huffington Post in a phone interview that he was toying with the idea of the condoms for quite some time. He noted that he did not have the confidence to attempt producing them until the baconlube became so successful.


Esch noted that the bacon odor of the condoms and the flavor come from the lube that is on them. He also said that their texture is the same as other latex condoms. This means that they are not extra crispy to the touch.

“There’s no injection mold or anything,” Esch said. He also said that a condom with bacon’s texture would not be too appealing. A three-pack of these bacon condoms sell for $10, which is a bit more expensive than the average pack of condoms. Esch said that orders should start shipping sometime in June.

The company has become known for its interesting food-themed products such as sriracha lip-balm and bacon mayonnaise. They also created the bacon coffin.