Got a tip?
Home » Legal News » DOMA Could be Defeated by Supreme Court 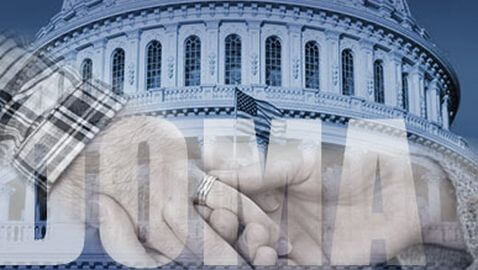 On Wednesday, the majority of Supreme Court justices indicated that they might be in favor of defeating a law that prevents federal benefits to legally married same-sex couples, according to Reuters.

Justice Anthony Kennedy, who seems to be the swing vote on this case, said that there is a ‘real risk’ the Defense of Marriage Act infringes on the traditional role of states in their ability to define marriage.


Rulings for both cases should come by the beginning of July. DOMA was enacted in 1996 and it denies federal benefits to same-sex couples because it defines marriage as occurring between a woman and a man. Kennedy called DOMA ‘inconsistent.’

“What gives the federal government the right to be concerned at all about what the definition of marriage is?” Justice Sonia Sotomayor said.


The court could rule on the issue of states’ rights, striking down the law without issuing a decision of whether or not DOMA actually violates the United States Constitution’s guarantee of equal protection under law.

Some of the justices criticized President Obama for abandoning the legal defense of DOMA in 2011, but Chief Justice John Roberts did question if Obama has “the courage of his convictions” by enforcing DOMA even though he called it invalid.