Bradley Turner, from La Grange, has been released on $37,500 bond after he turned himself in at the Lenoir County Sheriff’s Office, according to WITN. He was wanted in relation to a road rage incident over the weekend.

Turner, and his wife Christy, face multiple charges in Carteret County. The road rage incident ended close to Newport. Turner claims that a pickup truck ran him off the road. A passenger in that truck caught most of the incident on a cell phone camera.


Police said that Turner approached the driver of the truck and a fight ensued. Christy Turner can be seen exiting the vehicle holding a handgun, which is when the fight ended. She gives her husband the gun, who then points it at the other men.

Not seen on the video is Turner firing multiple shots into the truck as he left, according to deputies. Turner will appeal before a judge on Wednesday in Beaufort. He has been charged with discharging a weapon into property, going armed to the terror of the people, two counts of assault by pointing a gun, assault and injury to personal property.

Christy Turner has been charged with two counts of assault by pointing a gun.


We have embedded the video in this post for you to watch. 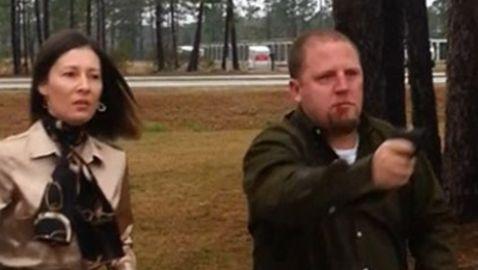 Summary of duties and responsibilities: The General Counsel role is new to the Fund and will lead...