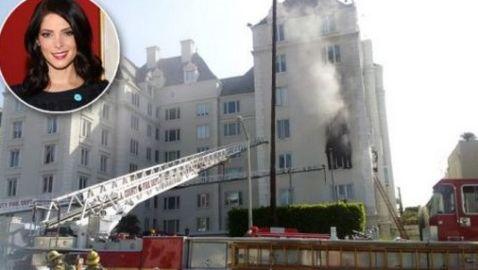 The condominium of Ashley Greene caught fire early on Friday, according to E! News. Despite not receiving information from Los Angeles County Fire Department spokespeople, E! News confirmed that the condo belonged to the actress. The condo is in the Granville Towers.

A spokesperson from the LAFD did confirm that three people complained of injuries and received treatment at the scene. All three were told they should go to the hospital, but they refused further treatment.


Two dogs were recovered from the condo after the fire by the LAFD and one was deceased. Smoke damage was covering the walls and debris was thrown all over the floor throughout the condo. The outside walls of the building also have smoke damage from the fire. Greene, her boyfriend, and her brother were all in the condo when it caught fire. She was in town to tape an episode of the Comedy Central show Tosh.O, hosted by Daniel Tosh.

According to the West Hollywood Sheriff’s Office, the fire started because of a candle. It was contained to just the one condominium and is still being investigated by the fire department and the Sheriff’s Office.

The fire was under control in less than 30 minutes and fifty-five firefighters responded to the fire at the condo.