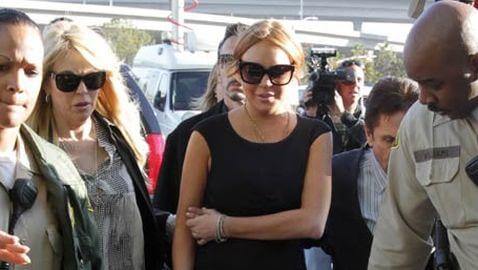 On Monday, Lindsay Lohan pleaded no contest to the misdemeanor charges stemming from a crash in June of 2012, according to The Los Angeles Times. The deal sends Lohan to a locked rehab facility for 90 days.

Lohan is also required to spend 18 months in psychotherapy and serve 30 days of community service as part of the plea agreement. She pled no contest to misdemeanor reckless driving and providing false information to the police. The charge of willfully resisting, obstructing or delaying an officer was dismissed.


Lohan has admitted she violated her probation from a shoplifting case in 2011 by pleading no contest to the charges. She was also ordered to pay the driver of the truck she hit restitution. She told police that she was not driving the Porsche when the accident occurred.

“I am pleased with the outcome,” Santa Monica’s chief Deputy City Attorney Terry White said. “We got what we offered.”


“I’m very confident that you won’t be seeing Lindsay Lohan in any criminal courts anytime in the future,” Heller said outside the courthouse. “She has fully recognized all of the issues that have to be addressed and I’m very confident she’ll be able to move forward in her life with dignity, pride and respect.”