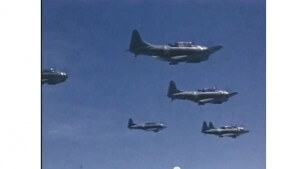 Hollywood director John Ford, famous for such Westerns as Stagecoach, and The Searchers, as well as his adaptation of The Grapes of Wrath, also directed this rare World War II film. It depicts American troops as they crack the Japanese code and are able to anticipate another sneak attack, and this after Pearl Harbor. The men of Midway prepared for Japanese attack, tensely waiting for the inevitable. 108 Japanese planes descend upon the island, and we watch the battle in all its devastating violence, but they failed to destroy it in their first attempt. On June 4th, the Japanese carrier Task Force was pinpointed, so the U.S. could make a counterattack. Planes from the U.S. carrier York Town approach Japan’s four carriers, and in a five minute period, they took out three of their carriers, and after a mortal blow had been dealt to the American carrier York Town, the Japanese’s fourth carrier was destroyed.

A Japanese official said, “At Midway, the American avenged Pearl Harbor.” It marked a turning point in World War II in the Pacific.

Commander John Ford, USNR, was serving in the United States Navy at the time and was head of the photographic unit for the Office of Strategic Services. He won an academy award for this 1942 film, The Battle Of Midway, and was himself wounded by shrapnel in the arm during the attack.