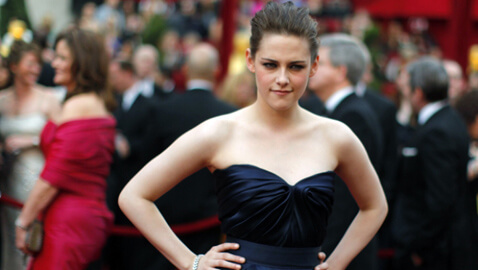 The 22-year-old Kristen Stewart was visibly not in a good mood during the Oscars on Sunday night in Hollywood. She was not with Robert Pattinson, but she did have something on her arm, crutches. Stewart dropped the crutches when she appeared on stage to present an award with actor Daniel Radcliffe.

The Associated Press reported that Stewart spoke with actress Anne Hathaway backstage prior to presenting.


“Oh no!” Hathaway said when seeing Stewart on crutches.

“I know, I’m an idiot,” Stewart replied. “But congratulations!” she said.

Stewart then went on to say that she cut her foot a couple of days ago after she stepped on glass. “I just hope [the wound] doesn’t open up right now.”


US Weekly then learned more about Stewart’s injury from her manicurist, Ashlie Johnson. “She had sliced her foot and everyone was worrying about would she wear heels or flats or one heel, crutches or no crutches. She tried so many options, she was really a trouper.”

“Kristen was nervous about her crutches so having her friends around playing music was just what she needed,” hairstylist Danilo said. “We all were trying to make her feel better and her friends were trying to tell her she’d be fine, she has insecurities about being in front of people so today was even tougher.”