On Friday, a meteor exploded over central Russia, injuring close to 1,000 people as fireballs crashed onto land. The explosions broke windows and damaged buildings, according to Reuters. In Chelyabinsk, 950 miles east of Moscow, an explosion was heard and a bright light was seen. All of this was followed by a shockwave.

Roscosmos, the Russian space agency, said that the fireball was traveling at a rate of 19 miles per second. As it traversed the horizon, a white trail of smoke was left in its wake. The white smoke could be seen as far away as 125 miles. The impact caused car alarms to ring, windows to break, and mobile phone networks to collapse. A sonic boom occurred, according to the Interior Ministry.


“I was driving to work, it was quite dark, but it suddenly became as bright as if it was day,” said Viktor Prokofiev, 36, a resident of Yekaterinburg in the Urals Mountains. “I felt like I was blinded by headlights,” he said.

There have yet to be any fatalities reported, but President Vladimir Putin told Emergencies Minister Vladimir Puchkov to attend to those who were injured.

“Unfortunately, the normal work of some industrial enterprises was disrupted, people have suffered as has social infrastructure – kindergartens, schools,” Putin told his Emergencies Minister Sergei Puchkov in televised comments.

“There have never been any cases of meteorites breaking up at such a low level over Russia before,” said Yuri Burenko, head of the Chelyabinsk branch of the Emergencies Ministry.

“I was standing at a bus stop, seeing off my girlfriend,” said Andrei, a local resident. “Then there was a flash and I saw a trail of smoke across the sky and felt a shockwave that smashed windows.”

Authorities in Chelyabinsk city warned residents to stay indoors unless they had to pick up their children from school. Simon Goodwin is an astrophysics expert at Britain’s University of Sheffield, who said, “While events this big are rare, an impact that could cause damage and death could happen every century or so. Unfortunately there is absolutely nothing we can do to stop impacts.”

The Emergencies Ministry urged residents not to panic and also said that the impact is not harmful to the environment or to the health of the people closest to it. 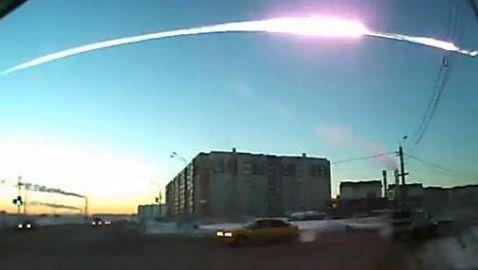