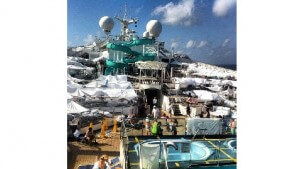 Going on a cruise seems less coveted than before, with all the news of pirates, stomach flu epidemics, and such, but the travesties of the Carnival cruise ship Triumph is especially poignant. Last Sunday an engine fire knocked out the electricity and they didn’t have power till a generator was brought on board days later — when passengers powered up their cell phones and sent their lamentations to friends and relatives. With 3,143 passengers and 1,086 crew, things got ugly quick. They didn’t come to port till Thursday night.

One of the major problems was the toilets backing up. Soon there was urine and feces everywhere, and the entire ship stank. Passengers began to build what the Daily Mail described as “shanty towns” on deck; mattresses were pulled out of cabins and rooms which were either too hot or too cold.

Kendall Jenkins, 24, had won tickets at a Houston Rockets basketball game. “We wore our life preservers a little longer than was socially acceptable,” she said. “And we camped out by our lifeboat — we had nightmares about ‘Titanic.'”


She also participated in a Bible study where they read Joshua 1:9: “Do not be discouraged, the Lord your God will carry you through this.”

Janie Esparza had gone on the cruise to celebrate her birthday. She said, “There were a lot of sick people and the smell was not good. It’s just been a really taxing experience for us. Things started to break down a few days ago — people just on edge. There were a lot of angry people on the ship.”


Her friend said, “The hallways were toxic — full of urine.”

Cleaning the ship will be a Herculean task for Carnival, now that they’re back, but appeasing customers and avoiding suits will also keep them on their toes for some time.


The cruise ship is offering a full refund, plus cruise credit of $500, to each passenger. But perhaps the vacation wasn’t a complete disaster. One man, Jon Hair, 39, a minister from Lack Charles, La., when he returned, kissed his wife and said it was “the best Valentine’s ever.” Perhaps like the failed vacations in the comic strip Calvin and Hobbes, they make the rest of the year seem so much better?