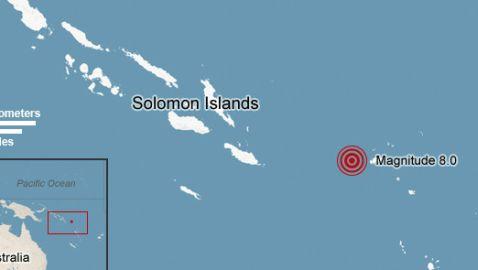 Early Wednesday, an earthquake off of the Solomon Islands triggered a five-foot high tsunami that damaged scores of homes, according to The Associated Press. Officials from the islands said that two waves measuring 4-feet, 11-inches, hit the western side of Santa Cruz Island. Close to 50 homes and properties were damaged, according to George Herming, a spokesman for the prime minister.

The tsunami was the result of an 8.0-magnitude earthquake that struck close to Lata on Santa Cruz in the province of Temotu. The area is home to some 30,000 people. According to the Pacific Tsunami Warning Center, a tsunami was spotted in Lata wharf of roughly three feet in height. Then, a 4-foot, 3-inch tsunami was seen in Vanuatu.


“People are still standing on the hills outside of Honiara just looking out over the water, trying to observe if there is a wave coming in,” said Herming during the early parts of the warnings.

An employee for the Solomon Islands Broadcasting Corp. in Honiara, Atenia Tahu, said, “People around the coast and in the capital are ringing in and trying to get information from us and the National Disaster Office and are slowly moving up to higher ground. But panic? No, no, no, people are not panicking.”

Solomon Islands Police Commissioner John Lansley said that it is believed multiple people died as a result of the tsunamis.


“Sadly, we believe some people have lost their lives,” he said. “At the moment we potentially know of four, but there may of course be more.”