A video was recently posted to North Korea’s official website, Uriminzokkiri, depicting a United States city under attack. The country has said it plans another long-range missile test and the city in the video appears to be New York City, according to LiveLeak.

The video, which is embedded in this post, appears as a dream sequence. You can see a man on board a North Korean space shuttle that has been launched into orbit by a rocket that Pyongyang successfully launched and tested in December.


In the video, the shuttle circles the world and it zooms in on countries it passes. You can see that Korea has re-unified in the video. As We Are the World plays in the background. Then, the video shows a U.S. city shrouded in the flag. The city’s buildings, including what looks like the Empire State Building, on fire or destroyed.

“Somewhere in the United States, black clouds of smoke are billowing,” a caption in the video reads. “It seems that the nest of wickedness is ablaze with the fire started by itself.”

“Despite all kinds of attempts by imperialists to isolate and crush us… never will anyone be able to stop the people marching toward a final victory,” the video said.


North Korea should conduct another nuclear test soon as a response to the UN sanctions against the country following the rocket launch in December. 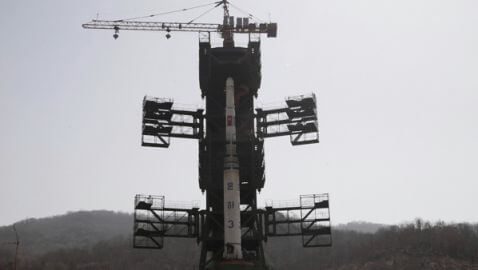