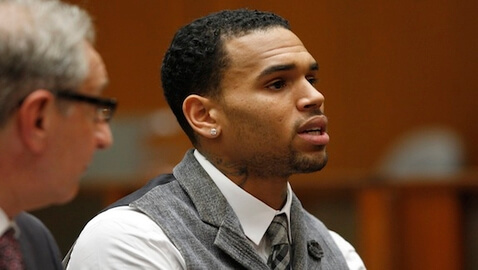 According to a report from TMZ, the L.A. County District Attorney has filed documents that claim Chris Brown violated probation when he submitted false community service records. In one of the incidents, Brown claimed he was picking up trash in Virginia when instead he was on a private jet to Cancun. The community service stems from the case in which Brown beat Rihanna.

On September 14, Bryan T. Norwood, the Chief of Police in Richmond, VA., sent a letter to a judge stating that Brown completed 202 days of community service. He was required to complete 180 days. Documents were attached to the letter that said Brown worked at Tappahannock Children’s Center. He reportedly performed jobs such as painting, cutting grass, washing windows, waxing floors and picking up trash.


The Richmond department said that Brown was supervised on 9 or 10 occasions, but not on any other dates listed in the letter. It was also discovered that the detective assigned to the case was informed she did not have to monitor Brown at the center. Instead, the location, duty, and times were all entered by Brown’s mommy.

The District Attorney says that Brown and the Chief of Police were known to have had a prior relationship. The documents also say that Mark Geragos, the lawyer for Brown, ‘instructed’ the Richmond P.D. lawyer on how to ‘handle’ questions from the D.A. about Brown’s community service. Geragos also told the probation officer of a court order instructing Brown’s community service be taken from the probation office and given to the police chief. There is no court order naming that demand.

The Children’s Center administrator tried to coach the guy who waxes the floors on how to talk to the D.A., but that person refused to lie and even told investigators that he was the only person to wax the floors at the center for the previous three years. Brown claimed he waxed the floors there on multiple occasions.


The D.A. opened an investigation when the judge became suspicious about the documents submitted. The D.A. said he found no “credible, competent or verifiable evidence” that Brown performed the 180 days of community service. Brown’s documentation skills were described as “at best sloppy … and at worst fraudulent reporting,” by the D.A.

The judge has been asked by the D.A. to reject Brown’s community service in Virginia and perform his obligations in L.A. County. The D.A. also noted other possible violations, including, the Frank Ocean fight, Brown testing positive for marijuana, throwing a chair into a window at “Good Morning America,” and others.


Geragos said the allegations, “In essence, it calls everyone a liar in the Richmond Police Department and the Virginia Probation Department.”