Got a tip?
Home » Breaking News » Shooting at Atlanta Middle School Injures One 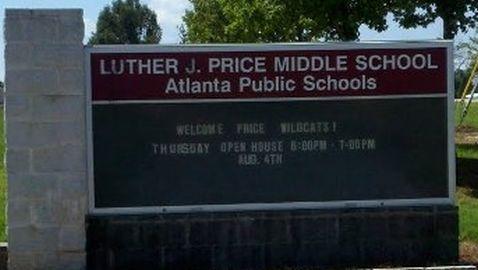 On Thursday, a 14-year-old student at an Atlanta middle school was shot in the head and is doing OK, according to WSBTV. The shooting occurred outside the building at Price Middle School, between the main building and the gym, located on Benjamin Weldon Bickers Drive at 1:50 p.m. A teacher was injured during the incident, but was not shot.

Telvis Douglas has been identified as the victim. The bullet went through tissue in the back of his head and exited. He was released on Thursday night from the hospital. The boy told his mom that he was switching classes when a student he recognized walked up to him, began ‘talking smack,’ and pulled a gun. He said he ran, which is when he was shot from behind.


Sources from the district said that the gunman emptied his clip, firing at students running from the incident. That has not been confirmed by the district or police. Erroll Davis, the Atlanta Public Schools Superintendent held a press conference at 5 p.m. Thursday.

‚ÄúThere is nothing more important than the safety and security of our students,‚Äù Davis said.

The school resource officer, an off-duty Atlanta police officer, disarmed the shooter. “When he was taken into custody, the officer actually took the gun off of the student,” an officer said.


The school was placed in lockdown as school officials and police secured the area. ‚ÄúThe obvious question is, ‚ÄòHow did this get past a metal detector?‚Äô That‚Äôs something we don‚Äôt know as of yet,‚Äù Davis said.

The suspect has been tentatively identified as a student at the school and police think it is an isolated incident. The mayor of Atlanta, Kasim Reed, said the following in a press release in response to the school shooting:


‚ÄúGun violence in and around our schools is simply unconscionable and must end. Too many young people are being harmed, and too many families are suffering from unimaginable and unnecessary grief. I pray that the student who was shot today at Price Middle School in southeast Atlanta recovers quickly and can return home to family and friends,‚Äù Reed said. ‚ÄúI would also like the students, faculty and families of the Price Middle School community to know that they have the full support of the City of Atlanta as they heal from today‚Äôs terrible incident. The city‚Äôs Employee Assistance Program counselors are already at the school providing guidance for students, faculty and family members.‚Äù

Hundreds of anxious parents arrived at the school in tears after being notified of the shooting.