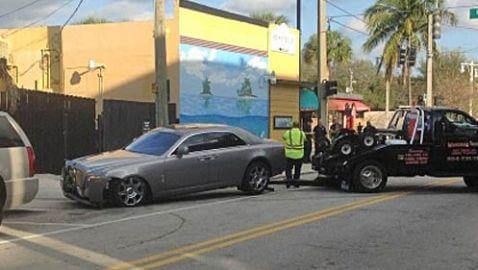 Earlier this week, Rick Ross crashed his Rolls-Royce into a building in Fort Lauderdale, Florida as he tried to escape a gunman who began shooting at his car, according to TMZ. Ross was not shot and neither was the woman in the car with him. The woman has been identified as Shateria L. Moragne-el, who is allegedly dating Ross.

The suspects managed to flee prior to the arrival of police. No one has been arrested in the case yet. Reports from the area claim that dozens of shots were fired at Ross’ vehicle close to 5 a.m. and none of them actually hit the car. There were buildings in the vicinity that were hit with gunfire though.


Police claim that a vehicle pulled next to the Rolls-Royce and someone inside it began firing at Ross’ vehicle. Police are rounding up surveillance footage from the scene of the vehicle’s crash. Sources say that cameras at a building across the street from where the shooting occurred were active at the time. There still have not been any suspects identified in the case.

Now we have learned that Ross has hired 24-hour armed security to protect him following the shooting on Monday. Ross had already been using armed guards during public events such as concerts and appearances. Now, he is going to use their services around the clock.

Sources associated with Ross told TMZ that Ross was receiving threats for quite some time, but he was not concerned with them. The sources also said that Ross now views the shooting as an ‘eye-opener’ and is going to do whatever he can to protect himself.