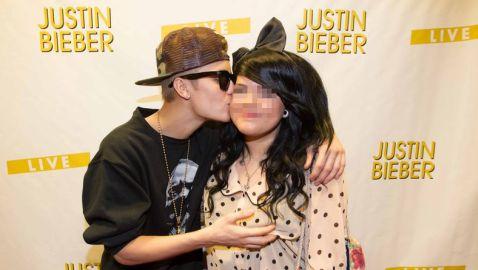 In a recent photo, Justin Bieber was photographed with a girl during a meet and greet. In the photo, it appears that Bieber is grabbing the girl’s breast. Bieber has been catching a lot of flak for this, but he continues to deny it despite the photo evidence, according to Fox News.

The picture was posted on Bieber’s website, but then removed. The girl in the picture is smiling and is seen whispering in his ear in another photo. The publicist for Bieber, Melissa Victor, told FOX411 that Bieber did not grab the girl’s breast. Instead, he was “moving his hand away from hugging her” as the picture was taken.


According to Twitter, the girl is identified as Jocelyn. Her tweets about the incident seem to corroborate her story with Victor.

“IM DYING HAHAHAHHAHA IT LOOKS LIKE JUSTIN’S TOUCHING MY BOOB IN THE PICTURE,” she tweeted. “”People can think what they want but I know what really happened & Justin does too so everyone else’s opinions don’t matter to me.”

We have embedded the photo in this post for all to see. Let us know your thoughts in our comments section below about Bieber and his possible groping incident with his female fan.