Got a tip?
Home » Legal News » Union Membership in United States Drops in 2012 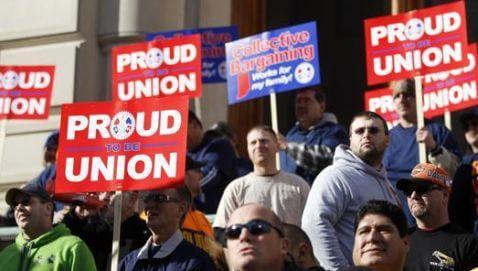 In 2012, the percentage of United States employees who belong to unions dropped to 11.3 percent, the lowest percentage in 76 years, according to Reuters. Compared to the data in 2011, the total number of union employees dropped by 400,000 from 11.8 percent, the Labor Department announced. The 11.3 rate is the lowest since 1936. Close to half of the losses came in Wisconsin, Indiana, Michigan and Ohio.

A professor of labor relations from the University of Illinois, Robert Bruno, said, “It goes back a couple of decades, that there has been a growing number of anti-labor policies. We have the weakest labor law and enforcement of labor law in the entire Western industrialized world.”


Despite the losses, unions saw increases in Kentucky, Georgia, Oklahoma, and Louisiana because of booming economies. These states are traditionally weak for unions. Unions have been blamed for the drops by some analysts. Union membership has been dropping since 2008, when it hit 16.1 million. That amount was good for 12.4 percent of the workforce. The highest percentage came in 1954, with a 28.3 percentage.

“They must now admit that they are not investing enough staff and funds in organizing and not embarking on an imaginative journey to rediscover the relevancy of unions,” said Gary Chaison, professor of industrial relations at Clark University. “Essentially, workers are feeling tremendous job insecurity … Yet as today’s figures suggest, workers are not turning to unions to act as their voice.”

The slow recovery from the recession has also been a factor in union membership as employers have had to cut jobs.


“It’s not a secret that some politicians chose to cut public education funding, balance the budgets on the backs of students and slash the education workforce,” Dennis Van Roekel, president of the National Education Association, a 3 million member union, said in a statement.

Public sector unions in 2012 lost 234,000 members. Close to 80 percent of that drop came from organizations that represent local government workers, most of them teachers.


“That’s a highly unionized sector and we know the public sector has been doing poorly in this recovery,” said William Briggs, chief economist for the largest U.S. union, the AFL-CIO, and former undersecretary at the U.S. Labor Department. “The weakness isn’t just a union story. It’s a story about the economy not functioning the way we hope it would.”

For the age group of 16 to 24, the membership rate in unions was just 4.2 percent. Workers between the ages of 55 and 64 had a union membership rate of 14.9 percent. This group had the most difficult time finding full-time work.