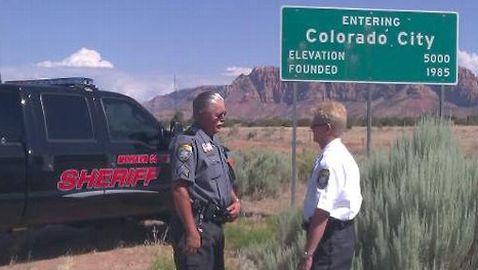 On Tuesday, Attorney General Tom Horne announced a probe of Arizona marshals who operate in a town that is considered to be home to one of the country’s largest polygamous sects. The marshals are being investigated for preventing women from leaving the church that is led by Warren Jeffs, who is in prison, according to The Associated Press.

The town at the center of the probe is Colorado, City, Arizona, which is near the border with Utah. The city is the headquarters of the Fundamentalist Church of Jesus Christ of Latter Day Saints.


“Women who wanted to escape have been forcibly held by the marshals against their will,” Horne said.

Horne did not offer much information about the investigation or the Marshal’s Office, which is a police force for Colorado City and Hildale, Utah.

“I can’t speak for the FLDS but the bottom line is the Marshal’s Office absolutely does not hold people against their will,” said lawyer Blake Hamilton. “The Arizona attorney general, as the highest ranking law enforcement official in Arizona, ought not be making those statements unless he has evidence of it. It’s just absolutely not true.”


Jeffs is serving a life sentence in prison in the state of Texas for convictions of child sex and bigamy charges. When authorities received a complaint about child abuse, they raided the Yearning for Zion Ranch of the church in 2008. Close to 400 children were rounded up by authorities. All of the children were returned by the government, but 11 men were arrested for sexual assault or bigamy and then convicted. Of those 11 men, Jeffs was one of them.

Last year Horne argued for a bill in the Arizona Legislature that would have abolished the Marshal’s Office in Colorado City, replacing them with deputies from the Mohave County Sheriff’s Office. The legislation failed, but Horne put aside funds for limited patrols by deputies. Horne noted that the money will be gone soon and is once again asking the Legislature to vote on the bill.


At Horne’s news conference, Flora Jessop was in attendance with him. Jessop is a critic of the church after fleeing in 1986. Also in attendance was her sister Ruby Jessop and her six children. Flora said that her sister was held captive by the church for years. She was subjected to sexual and mental abuse by her husband and was not allowed to leave the church with her children.

Ruby fled last year and won temporary custody of her children who were held ‘hostage’ by the sect, according to Flora. “It’s a good day for freedom,” she said of the investigation.