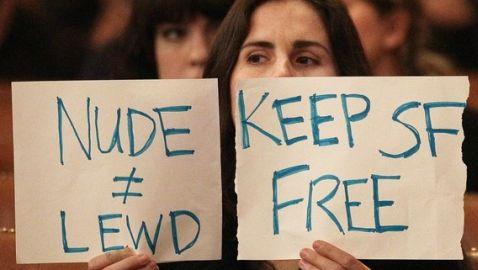 A hearing is scheduled for Thursday in San Francisco in which a federal judge is going to think about blocking a brand new city law that requires people to wear clothing because of public nudity activists, according to The Associated Press.

The judge, U.S. District Judge Edward Chen, was asked to block the law from taking effect on February 1 as he considers the lawsuit they filed to make sure the ordinance is invalid. The public nudity activists argue that the ban on public nudity is a violation of the First Amendment to free speech because nudity is a political statement.


The activists also make the argument that the new law violates their equal protection rights because it exempts children under the age of five and public nudity at specific events. Those events include an annual street fair, the Bay-to-Breakers foot race, and the city’s Gay Pride Parade.

According to the city’s attorneys, the new law takes into account the safety, “general welfare,” and public health of the city’s residents. The ban was authorized by the Board of Supervisors by a vote of 6-5 in December after experiencing multiple vocal and naked protests from nudists and nudist supporters.

The protestors argued that the ban across the city is unnecessary and that it would take the attention of police officers from larger problems while also undermining the values of tolerance and appreciate of the offbeat that the city so values.


The legislation was introduced by Supervisor Scott Wiener, the representative of the largely gay Castro District in San Francisco. The reason he introduced the legislation was that he received multiple complaints about naked men who walked the streets naked after meeting in a plaza. The ban will require people to wear clothing below the waist when they are in public.