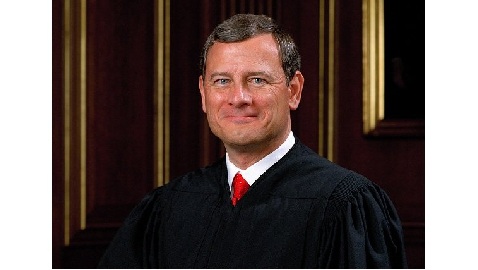 Chief Justice John Roberts is the most recent target of the birther movement, which is calling for his impeachment if he swears in President Barack Obama for a second term later in the month of January.

Last week, Craige McMillan, a columnist at WND.com, wrote a column that asked Roberts not to swear in Obama because the president does not meet the definition of a natural born citizen, according to the Constitution. McMillan made claims that the president is not a citizen of the country because his father was a citizen of Kenya and the United Kingdom. His argument goes further to say that Obama cannot be “a natural born citizen” because his dad was not a United States citizen. Stanley Ann Dunham, Obama’s mom, was born in Kansas by parents who also were born in Kansas.


In McMillan’s piece, he wrote the following:

“Your failure to investigate these citizenship issues surrounding Mr. Obama at the time questions were raised during his first term places you in a terrible position. You are now confronted with a most difficult choice.

Your own oath of office, sworn before God and the American people, requires you to uphold the Constitution. (If not you, then who?) If you now administer the oath of office for the presidency to a man who by his own admission fails to meet the natural born citizen requirement imposed by that Constitution, you have violated your own oath of office and are rightly subject to impeachment by any House of Representatives, at any time, now or in the future.”


McMillan offered a suggest for the outcome of the country if Obama is sworn in once again and it said: “Illegal wars. Illegal debts. Illegal laws.”

Attempts have been made in the past to prove that Obama is not a natural citizen, with real estate mogul Donald Trump leading the way by asking for Obama’s birth certificate.