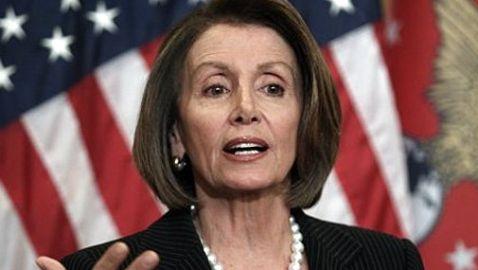 President Barack Obama was urged by House Minority Leader Nancy Pelosi on Sunday to pass on the scheduled debate regarding the increase of the debt ceiling by declaring the cap unconstitutional.

Pelosi made an appearance on “Face the Nation” on CBS to discuss her endorsement of the 14th Amendment option. The option says that Congress does not have power to use the debt ceiling as a device to take Congress hostage because the validity of the debt “shall not be questioned.”


On the show, Pelosi said, “Well, you ask the Republicans, because we always passed the debt ceiling. When President Bush was president, as he was incurring these massive debts, and the Republicans weren’t saying ‘boo’ at the time. There should be, this is a conversation where there should be no doubt. In fact, if I were president, I’d use the 14th Amendment, which says that the debt of the United States will always be paid.”

Bob Schieffer responded with, “You would just go ahead and do it, you wouldn’t wait for the Congress?”

Pelosi answered: “I would just go do it. But the Congress has incurred much of this debt. And so what are you saying, we incurred it but we’re not going to pay it? If you want to say, ‘We are not going to do it so much in the future,’ well that’s another thing. But you can’t say, ‘I’m not paying my past debts.'”


The option in the 14th Amendment is gaining steam amongst Democrats on Capitol Hill as Senate Majority Leader Harry Reid urged Obama to deploy the option when the two were thinking about the fiscal cliff deal.

On the other side of things, the White House continues to resist the option, claiming that it does not have the legal power to use it and if it did, if the White House had to use it then bad economic signs would be sent.


“This administration does not believe that the 14th Amendment gives the president the power to ignore the debt ceiling — period,” White House Press Secretary Jay Carney said back in the month of December.