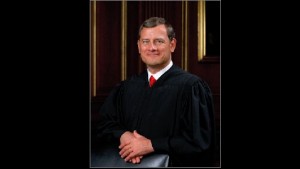 This year, Chief Justice John Roberts placed special emphasis on the “fiscal cliff” in his annual year-end report on the federal judiciary. The 16-page report, which is traditionally released the last day of the year, is written by head of the federal judiciary. In it, Roberts framed the trajectory of Judiciary spending in terms of the immediate fiscal cliff and in terms of U.S. deficit in general.

The court only represents two-tenths of 1% of the federal budget, and they’ve been cutting. They dropped 2.8 percent in its $75.55 million operations budge in fiscal year 2012, and 3.7 percent for fiscal year 2014. Nevertheless, he says it can’t keep going on this way.

“I therefore encourage the president and Congress to be especially attentive to the needs of the judicial branch and provide the resources necessary for its operations. Those vital resource needs include the appointment of an adequate number of judges to keep current and pending cases. At the close of 2012, 27 of the existing judicial vacancies are designated as presenting judicial emergencies.”


Judicial spending has been down since 2004 in an “aggressive” cost-containment strategy. Things might get difficult in the future, he notes.

“Our country faces new challenges, including the much publicized ‘fiscal cliff’ and the longer-term problem of a truly extravagant and burgeoning national debt. No one seriously doubts that the country’s fiscal ledge has gone awry. The public properly looks to its elected officials to craft a solution. We in the judiciary stand outside the political arena, but we can continue to do our part to address the financial challenge within our sphere.”