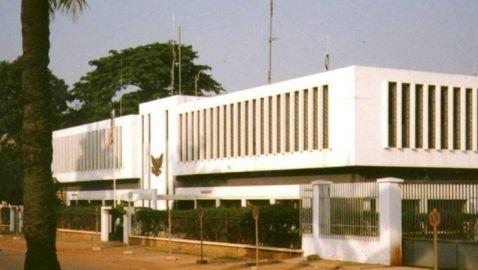 The United States embassy in the Central African Republic has been closed by the State Department due to rebels advancing and escalating violence. The closure was announced on Thursday by U.S. officials. The ambassador and his team was ordered to leave the country, according to The Associated Press.

Lt. Col. Todd Breasseale, a spokesman for the Pentagon, said that United States citizens and designated foreign nationals were ordered to leave the embassy in Bangui and be escorted “to safe havens in the region” by the U.S. Africa Command. The order was handed down by Defense Secretary Leon Panetta.


Patrick Ventrell, a spokesman for the State Department, said that the embassy suspended its operations temporarily, but diplomatic relations with the country were still active. In a statement, Ventrell said the following:

“This decision is solely due to concerns about the security of our personnel and has no relation to our continuing and long-standing diplomatic relations” with the Central African Republic.

United States citizens were issued a warning against traveling to the Central African Republic following the announcement of the evacuation. The State Department said that it could not “provide protection or routine consular services to U.S. citizens” while also urging those who chose to stay in the country to “review their personal security situation and seriously consider departing” using a commercial flight.


On a United States Air Force plane headed for Kenya, officials from the U.S. said that 40 people were evacuated. Ambassador Laurence Wohlers and his staff evacuated the embassy on Thursday as the president of the Central African Republic asked France and other foreign countries for help in fighting the rebels. The rebel group has been overtaking territory and closing in on the capital city. France declined military assistance.

Close to 10 towns in the north section of the country have been seized by rebels. The capital city is home to 600,000 residents and they are fearful that an attack will happen at any moment. Current president Francois Bozize rose to power almost 10 years ago during a rebellion. France is the former colonial ruler of the Central African Republic, which is why the country was asked for military aid.


The French defense ministry said that some 200 French soldiers are in the country currently, training the army and offering technical support. Francois Hollande, the French President, said that his country wants to protect its interests in the Central African Republic, but not the government of Bozize. He has encouraged peace talks between the two sides.