Got a tip?
Home » Breaking News » General Norman Schwarzkopf Passes Away at 78 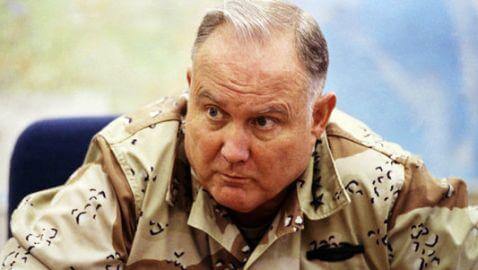 Retired General H. Norman Schwarzkopf passed away at the age of 78 on Thursday in Tampa, Florida. He passed away due to complications from pneumonia. In 1988, Schwarzkopf was named as the commander in chief of U.S. Central Command at Tampa’s MacDill Air Force Base. This made him responsible for overseeing the headquarters for U.S. military and security issues in two dozen countries in the Middle East and central Asia.

Schwarzkopf then became the commander of Operation Desert Storm in 1990, which was a coalition of 30 countries created by President George H.W. Bush to drive the Iraqi army out of Kuwait, according to The Associated Press.


When asked his opinion about the invasion of Iraq in 2003, Schwarzkopf said the following: “What is postwar Iraq going to look like, with the Kurds and the Sunnis and the Shiites? That’s a huge question, to my mind. It really should be part of the overall campaign plan.”

Schwarzkopf was born in Trenton, N.J. His father, Col. H. Norman Schwarzkopf Jr., founded and commanded the New Jersey State Police. The younger Norman graduated from West Point in 1956 with a degree in engineering and then earned his master’s in engineering from the University of Southern California. He also taught missile engineering at West Point.

Schwarzkopf served two terms in Vietnam, one as U.S. adviser to South Vietnamese paratroops and one as a battalion commander in the United States Army’s Americal Division. For his service in Vietnam, he was awarded three Silver Stars for valor, a Bronze Star, a Purple Heart and three Distinguished Service Medals.


Schwarzkopf retired from the Army in 1992 and he wrote an autobiography called “It Doesn’t Take A Hero.” In the book he wrote the following about the Gulf War: “I like to say I’m not a hero. I was lucky enough to lead a very successful war.” The General was knighted by Queen Elizabeth II and was awarded decorations from France, Britain, Belgium, Kuwait, Saudi Arabia, the United Arab Emirates, Qatar and Bahrain.

“I may have made my reputation as a general in the Army and I’m very proud of that,” he once told The Associated Press. “But I’ve always felt that I was more than one-dimensional. I’d like to think I’m a caring human being. … It’s nice to feel that you have a purpose.”


“General Norm Schwarzkopf, to me, epitomized the ‘duty, service, country’ creed that has defended our freedom and seen this great Nation through our most trying international crises. More than that, he was a good and decent man — and a dear friend,” Bush said.

“From his decorated service in Vietnam to the historic liberation of Kuwait and his leadership of United States Central Command, General Schwarzkopf stood tall for the country and Army he loved,” President Barack Obama said in a statement.