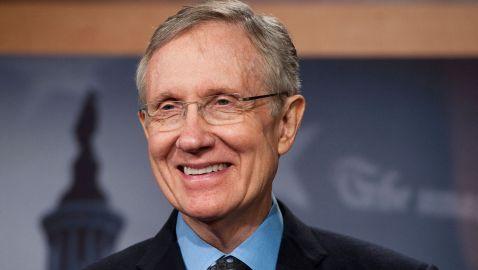 On Thursday, Senate Majority Leader Harry Reid said that the House of Representatives is a ‘dictatorship.’ Reid spoke on the Senate floor about his frustrations with the House as the deadline for the fiscal cliff approaches.

Reid said that John Boehner, the House Speaker, could end the stalemate and prevent the tax hike beginning in 2013 by proposing legislation that the Senate has already passed. That legislation would keep the Bush-era tax cuts for income earners under $250,000, which is roughly 98 percent of those who pay taxes.


Reid said that Boehner would not do any of that since he simply caters to members of his Republican party and would only propose legislation that is supported by Republicans.

“If the 250 were brought up, it would pass overwhelmingly. What goes on in this country shouldn’t be decided by ‘the majority,’ it should be decided by the whole House of Representatives,” Reid said. “The speaker, he said, ‘No, it has to be a majority of the majority.'”


Reid then suggested that Boehner continues to stall so a vote will not be taken until January 3, when Congress returns to session. This would mean that Boehner would not have forced his party members to vote on raising taxes, which would help him keep his job.

“John Boehner seems to care more about keeping his speakership than keeping the nation on firm financial footing,” Reid said.


Reid then noted that Boehner is weak because his ‘Plan B’ offer, which would have increased taxes for income over $1 million, did not reach a vote because of displeasure amongst his party members.

“He has so many people over there that won’t follow what he wants,” Reid said. “That’s obvious from the debacle that took place that week. And it was a debacle.”

“It was so bad, he was in such difficult shape there, he wouldn’t even allow a vote to take place with his Republicans because he knew he would lose,” Reid said.

A spokesman for Boehner, Michael Steel, said the following in response to Reid’s comments on Thursday:

“Senator Reid should talk less and legislate more. The House has already passed legislation to avoid the entire fiscal cliff. Senate Democrats have not.”