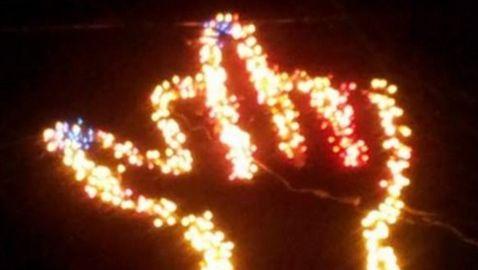 Sarah Childs, a resident of Louisiana, had to deal with the police after she upset her neighbors by hanging her Christmas lights in the shape of a middle finger. Childs was arguing with her neighbors in Denham Springs, which is east of Baton Rouge, which is why she decided to send them a message using her holiday decorations.

After her neighbors complained, officers threatened to arrest Childs, which led to her and the American Civil Liberties Union of Louisiana to sue the city. On Thursday, a judge ruled in the favor of Childs.


“I imagine it will be back up before too long,” ACLU of Louisiana executive director Marjorie Esman said about the middle finger decoration.

The light display was put up on her roof last month and has removed them twice since then. One time, the lights had to be removed after an officer told Childs she could receive a fine. The second time she had to take down the lights was when a second officer threatened to arrest Childs.

A temporary order that bars the city from forcing the display to come down was issued by U.S. District Judge James Brady. The order, which was two pages, said that the efforts of the city to keep Childs from showing her lights violate her rights to due process and free speech. The judge scheduled a hearing in Baton Rouge for January 7.


Paeton Burkett, the attorney for Denham Springs, said that the city will abide by the judge’s order. “We’re going to sit down with everybody involved and see if there’s any merit to it,” she said.

Named as defendants in the lawsuit are Mayor Jimmy Durbin and Police Chief Scott Jones.


An officer was dispatched to Childs’ home, according to the lawsuit, after multiple neighbors called the mayor to complain about her light display. The officer who was dispatched told Childs that she is violating the “obscenity statute” of the city and would be fined if the hand was not removed. The city does not have an obscenity statute though.

The lights were reinstalled after the ACLU sent a letter to the city defending her. When the lights were put back up on her roof, Childs added a second hand with another middle finger extended.

“Childs’ impromptu song allegedly contained some obscenities directed at her neighbors, so the city cited her for simple assault,” the suit said.