Got a tip?
Home » Breaking News » Wal-Mart’s Sold Out: Guns Selling like Crazy after Mass-Shootings and Talk of Legislation 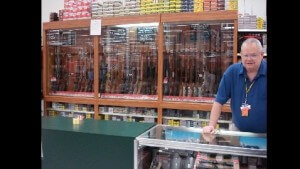 With the recent mass shootings in Aurora and Newton, and with the world buzzing over gun laws, including President Barack Obama promising that his administration would produce “concrete proposals” by next month to handle gun violence, this inspires the market, naturally enough, to grab all the guns while they can.

Wal-Mart, which though they took off a variety of guns from their shelves in 2006, put them back on in April 2011, sells all sorts of “sport’s rifles” which look like M-16 military rifles, and resemble the kind used in Newton, Connecticut to kill 20 children. That specific gun, the Bushmaster AR-15, has been selling out at gun shops, perhaps in anticipation of being especially targeted for legislation. Wal-Mart, meanwhile, is completely sold out of guns in fives states, including Pennsylvania, Kansas, and Alabama.

“We remain dedicated to the safe and responsible sale of firearms in areas of the country where they are sold,” said David Tovar, a Wal-Mart spokesman, Tuesday.


In the same vein, firearm retailers such as Hyatt Gun Shop, which sold $1 million in guns on Tuesday, their greatest sales since they opened in 1959, are seeing an incredible surge in sales.

“It’s kind of the perfect storm for the gun industry,” said Justin Anderson, who directs online sales for Hyatt. “When these things happen, even though it’s sad, it does pick up sales.”

That violent gun-sprees inspire the sales of guns is a grim and twisted reality. However, it is clear that these sales are not inspired by copy-cat criminals, but Right to Bear Arms proponents who want to secure a model of a gun that might soon become more controlled.


What forms these controls will take will be clear soon, as Obama’s administration follows through on their promises to redress these situations, and as the issue takes over Congress and shapes new legislation.