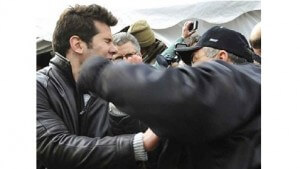 Michigan’s new “right to work” law is bad news for unions, and they aren’t taking it lightly. At a pro-union protest Tuesday, they attacked a tent set up by a conservative organization, Americans for Prosperity, and when Fox News contributor and conservative comedian Steven Crowder attempted to intervene he received four punches to the face, giving him a chipped tooth and bloody forehead.

Fox News has repeatedly replayed the track, and in a day it received about a million hits on YouTube. The Fox coverage claims he was “viciously assaulted,” by “left-wing thugs.”

Certainly things were ugly to begin with, as pro-union demonstrators hailed the reporters with profanity, screams, and demands, with one man telling Crowder to “get the f— out of my face!” As Democratic Rep Douglas Geiss had warned on Tuesday, “There will be blood, there will be repercussions.”


There is some question as to who the attacker actually is. He wore an International Brotherhood of Electrical Workers jacket and was verbally fighting with a defender of the tent when Crowder placed himself between the two.

“As of yesterday, Steven Crowder has not yet filed a police report, and certainly if he did, Michigan State Police will investigate,” said spokeswoman Tiffany Brown to MLive.com. It seems, instead, that Fox News and Crowder intend instead to play up the violence and insensibility of the pro-union crowd.