Got a tip?
Home » Weird News » Half of People Shot by Police are Mentally Ill 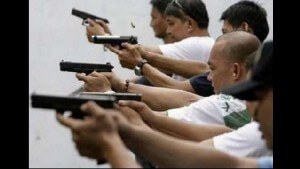 A new study put out by a Maine newspaper exposes the percentage of mentally ill people killed by police shootings each year: nearly half! The Portland Press Herald and Maine Sunday Telegram sifted through statistics of police shootings, and though the authorities don’t keep specific tabs on the mental illnesses of those involved in violent confrontations, some general tendencies could be revealed. As they said:

“A review of available reports indicates that at least half of the estimated 375 to 500 people shot and killed by police each year in this country have mental health problems.”

The report concluded that 58 percent of those who died from police fire since 2000 were in fact mentally ill, and this according to reports form Maine Attorney General’s office. To thicken out the statistics, the Maine report included some anecdotal examples:


“In Saginaw, Mich., six police officers gun down a homeless, schizophrenic man in a vacant parking lot when he refuses to drop a small folding knife. In Seattle, Wash., a police officer fatally shoots a mentally ill, chronic alcoholic as he crosses the street, carving a piece of wood with a pocket knife. In Portland, Ore., police check on a man threatening suicide and wind up killing him with a single gunshot in the back.”

The conclusion of the paper was that law enforcement needs to be better trained in handling crisis situations with mentally ill persons. While this may be true, there should be no implication that most or necessarily any of those deaths were unjustified. After all, if it is ever necessary to gun down a sane person to protect police and the public, it certainly would be just as justified to gun down an insane person.

Nevertheless, with only 14 out of 200 state troopers receiving crisis intervention training regarding such conflicts, it is possible that a more thoroughly and carefully trained force could handle confrontations with the mentally ill in a safer gentler manner.