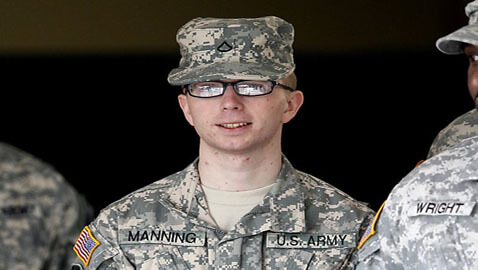 Prosecutors for the military are working up the chain of command of a brig in the Marine Corps to prove that the government justifiably held Army Pfc. Bradley Manning in the WikiLeaks case, according to a report from the Associated Press.

Manning has claimed that by spending nine months in maximum custody at Quantico, Virginia, his case should be dismissed. A hearing is scheduled for Wednesday at Fort Meade. The proceedings originally began on November 27 and should last until December 12.


Last week, Manning testified that he was exhausted after having to spend 23 hours per day in an eight by six foot cell. At times, Manning was in the cell without clothing so he could not hurt or kill himself. The commander of the brig repeatedly rejected the recommendations of a psychiatrist to reduce the restrictions on Manning. The Pentagon also ruled that the treatment was legal.

The charges could be dismissed by Judge Col. Denise Lind if she rules in favor of the defense. The most likely scenario is that Lind will take into account extra credit when it comes time to sentence Manning. The lawyers for Manning have requested 10-for-1 credit if the case is not dismissed from court.

Manning has been charged with 22 offenses that include aiding the enemy. That charge comes with a maximum penalty of life in prison.