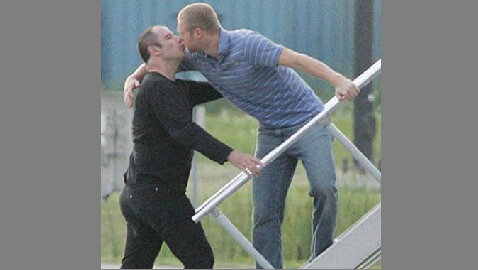 John Travolta is being sued by a former pilot who claims that he had a private gay relationship with the actor, according to a report from TMZ. The pilot said that he did not sign a confidentiality agreement with Travolta that would prevent him from speaking to the media. According to Travolta’s reps, the pilot is absolutely full of it.

The pilot has been identified as Doug Gotterba, who said that he worked as Travolta’s pilot from 1981 to 1987. Gotterba first made the news when he spoke with the National Enquirer regarding his ‘steamy affair’ with Travolta. In the lawsuit filed by Gotterba he does not go into detail about the relationship but did say that the media response caused him to receive a threatening letter from Marty Singer, the lawyer for Travolta.


Gotterba claims in the lawsuit that Singer threatened to sue Gotterba for violating a confidentiality agreement he signed after his employment with Travolta ended. Gotterba has said that he signed a termination agreement but that it did not have any clauses in it about keeping information confidential. This has led Gotterba to claim innocence and that he should be permitted to discuss Travolta without facing a lawsuit.

Singer talked with TMZ, telling the website that the lawsuit from Gotterba is ‘ridiculous’ because Gotterba signed a confidentiality agreement and that he filed it in the lawsuit. Singer also said, “Mr. Gotterba obviously filed this lawsuit to get his 15 minutes of fame. We plan to get this meritless case promptly dismissed.”