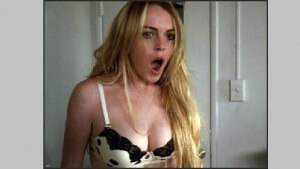 This is a very bad time for young starlet Lindsay Lohan. The setting was tough enough: she is on probation for stealing jewelry and earlier this week she learned Lifetime may sue her for breach of contract for her work in the network’s TV movie “Liz & Dick.” Her contract forbade her from driving a vehicle during the filming of the movie. But drive she did, and then crash and lie about it, which is why she is being charged today not only with reckless driving, when she crashed her Porsche into a big rig, but as TMZ reports, also for giving false information to a police officer (she claimed she was just a passenger) and obstructing or resisting a police officer in performance of his duty. That’s three charges all hitting her at once and probably costing her her probation, which stipulated that she obey all laws. But if that wasn’t enough, she just received an additional charge: she punched a woman in the face at a bar 4 a.m. Thursday morning. We already reported that she was being charged for lying to the cops; now she has four charges in two States.

The details on her bar brawl are a bit sketchy, but it seems she got into an altercation with another patron of the bar, Tiffany Eve Mitchell, and soon words led to fists, and Lohan went from saying “Give me some space” to punching her in the face.

“Oh my God! I didn’t touch anyone!” she cried when being led away in handcuffs. Though her honesty to police is in doubt at this point, it isn’t yet clear whether she punched in self defense.

The scuffle, it seems regarded sexual jealousy over a member of the band The Wanted; Lindsay had been seeking his attention, but according to TMZ he was disgusted by how drunk she was, and turned his attention to antoher woman, which angered Lohan.