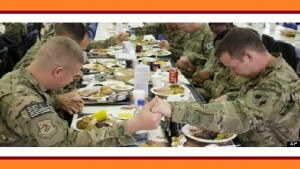 The 11-year war in Afghanistan persists, but though it was hardly mentioned during the last election, the soldiers are thankful that it is scheduled to be over by the end of 2014. Thursday in Kabul, Afghanistan, 2,500 diners set down at a red-white-and-blue themed hall, with tables holding brochures about how “Learn about combat stress,” alongside all the food.

The troops played a game that combined football, soccer, and rugby, to fit the short playing field nearby.

“The war in Afghanistan wasn’t even brought up as a topic of conversation,” he said, as reported by the Associated Press. “It was a little surprising to me. Hopefully, that will change and people will realize that we still have troops here and they are fighting everyday.”

Army Sgt Adam Draughn wanted to clear up a mistake some American s make about the Afghan people. “Honestly, I think the biggest misconception in my opinion is that, you know, we actually are loved here. The nationals do care about us. They do want us here to help them. We’re not here uninvited.”