Got a tip?
Home » Breaking News » Susan Rice Responds to Criticisms Against Her 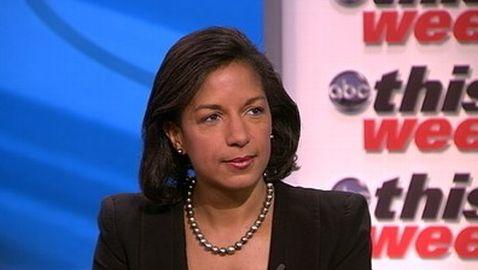 On Wednesday, United States Ambassador Susan Rice responded to comments made about her and her account of the attack on the U.S. Consulate in Benghazi that killed four Americans. Rice that her account was based on the initial intelligence community assessments. Rice said that she respects Senator John McCain, who has criticized her since her account, but said “some of the statements he’s made about me have been unfounded, but I look forward to having the opportunity at the appropriate time to discuss all of this with him.”

Republicans shot down her initial comments about the attack, which she claimed were caused by an anti-Muslim video posted to YouTube in the United States. The attack occurred on September 11, the 11-year anniversary of the 9/11 attacks. Critics of Rice have said multiple times that it was a terrorist attack on the consulate and not an angry mob that killed U.S. Ambassador Chris Stevens.


Rice has received the brunt of the criticism because it has been rumored that she is going to eventually replace Secretary of State Hillary Clinton, who reportedly is not going to return for President Barack Obama’s second term in the White House.

At the United Nations Security Council, Rice told reporters: “As a senior U.S. diplomat, I agreed to a White House request to appear on the Sunday shows to talk about the full range of national security issues of the day, which at that time were primarily and particularly the protests that were enveloping and threatening many diplomatic facilities, American diplomatic facilities around the world, and Iran’s nuclear program. The attack on our facilities in Benghazi was obviously a significant piece of this.”

Just a couple of hours prior to the attack in Benghazi, a mob attached the United States Embassy in Cairo in response to the anti-Muslin video.

Rice continued, “You know the FBI and the State Department’s Accountability Review Board are conducting investigations as we speak. And they will look into all aspects of this heinous terrorist attack, to provide what will become the definitive accounting of what occurred.”


“Let me just end by saying I knew Chris Stevens. I worked closely with him and had the privilege of doing so as we tried together, as a government, to free the Libyan people from the tyranny of (Libyan leader Moammar) Gadhafi. He was a valued colleague, and his loss, as well as the loss of his three colleagues, is a massive tragedy for all of us who serve in the U.S. government, and for all the American people,” Rice said.

“None of us will rest, none of us will be satisfied until we have the answers, and the terrorists responsible for this attack are brought to justice,” she said.