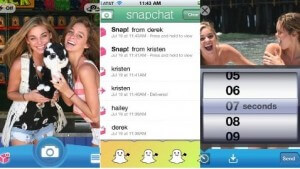 Snapchat is the latest app not designed for sexting. That it makes sexting convenient and comfortable is unanticipated selling point for many teens, however. The app sends time-sensitive pictures to the recipient — ten seconds of viewing before they are erased forever. What use this could be at all aside from sexting is anybody’s guess, but the owner of the app seems surprised at the prospect.

As Buzzfeed reported, Snapchat CEO Even Spiegel laughed that “The minute you tell someone that images on your server disappear, everyone jumps to sexting.” As if that was a surprise. He then (seemingly) naively said “I just don’t know people who would do that. It doesn’t seem that fun when you can have real sex.”

Despite the unthinkability of anybody using his app for such purposes, the company has made sexting easier, sharing the photos in live time and notifying the sender if the recipient took a screen shot. Nevertheless, knowing that your supposed friend took a screen shot doesn’t erase it from his phone: he can copy, share, and distribute it as he pleases.


Another way of bypassing the photo-eraser is to take a picture of it with another phone. These two outs make the sexting prospects of the app seductive and dangerous: especially for teens, who might abuse it.

Knowing who you can really trust, and who will misuse private pictures requires character insight that even adults lack, let alone budding teens. The app may be a temptation.