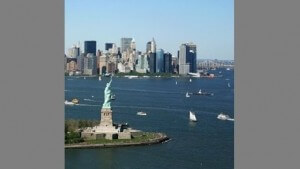 In the wake of Hurricane Sandy, a damaged sewage company, the nation’s fifth largest, has been unable to fix a leak of human waste into New York Harbor. How much waste? Three billion gallons. When will it be fixed? We’re not sure.

The best indication of when it will be fixed comes from the facility’s executive director, Mike DiFrancisci, who simply said “ASAP.”

“We’ve never had the facility flood like this,” he added.


So that’s the harbor of the Statue of Liberty, our national symbol, filling with human sewage. The harbor that greeted so many immigrants has been soiled and desecrated and can’t even be touched. The danger comes from the bacteria, which could spread infection. All fishing, crabbing, and shellfishing are therefore banned, said Larry Ragonese, a Department of Environmental Protection spokesman, indefinitely banned, and residents are instructed not even to touch the water.

The Newark Company, Passaic Valley Sewerage Commission, intends to strengthen their facility so that future storms won’t cause such damage. The facility has miles of underground chambers and pipes. With the new changes, “Underneath it would be no different than being in a battleship, making sure the doors are watertight,” said DiFrancisci. Natural disasters have a way of showing mankind their weaknesses.