Got a tip?
Home » Breaking News » Romney Claims Obama Won Election because of “Gifts” to Voters

In a report from the Associated Press, Republican presidential candidate Mitt Romney has been telling top donors that President Barack Obama was able to win a second term in the White House by giving ‘gifts’ to young voters, Hispanics and blacks.

“The president’s campaign, if you will, focused on giving targeted groups a big gift,” Romney said in a call to donors on Wednesday. “He made a big effort on small things.”

The popular vote in the election was won by Obama by 3.5 million votes, good for 3 percent, and won the Electoral College by a count of 332-206. Amongst women voters, Obama held an 11 percent lead over Romney and won more than 9 of 10 black voters and 7 of 10 Hispanic voters.

Romney cited free health care “in perpetuity,” which was highly motivational to Hispanic and black voters and those who make anywhere from $25,000 to $35,000 per year. Romney said that Hispanic went to the polls in droves because of the promise of “amnesty” Obama made to children of illegal immigrants.

Romney then went on to discuss the gifts Obama gave to young voters. Those gifts include being able to remain on their parents’ health insurance plans for longer periods and for partial forgiveness of college loan interest. Romney then mentioned that young female voters received the gift of free contraception coverage under Obama’s health care plan.

During the phone call with donors, Romney said that he and his team talked about how the group of donors could stay connected and influence how the Republican Party selects future nominees. Romney said, “which, by the way, will not be me.” 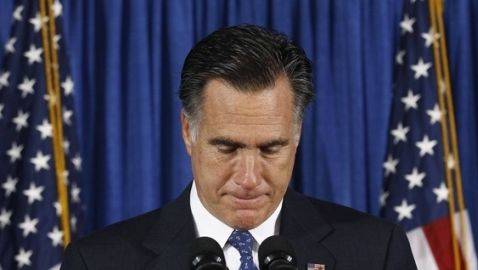