Got a tip?
Home » Weird News » Speculations over Petraeus’s Resignation Being an Obama Cover-Up are Refuted 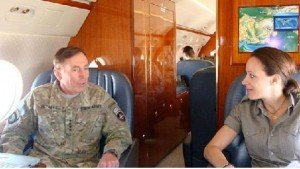 The speculation regarding CIA chief General David Petraeus has gone in a few directions. Imagining scenarios for CIA cover-ups is often irresponsible, but with the investigation of Petraeus’ affair and his subsequent stepping down from leadership politicians have been wondering a few things: Did Obama keep this quiet until after the elections? Did Petraeus’ mistress compromise government security? Is the dismissal of Petraeus a smokescreen to get him out of testifying about the attacks in Benghazi?

“What would he have told us?” asked a senior Congressional staffer. “The resignation is incredibly convenient for the administration. Would he have revealed the CIA knew the Benghazi compound was under threat and Washington did nothing to secure it?”

“Any allegations of a cover-up are nonsense, and I’ve said so repeatedly,” Obama told anchor Ron Steel in an interview. “Look, these are our people that we send into harm’s way. There’s an investigation being done as we speak, and not only will we find out exactly what happened, but we will bring to justice those who carried out this attack.”


This in part answers Sen. John McCain’s suggestion, “I don’t know if it’s either a cover-up or the worst kind of incompetence.”

As for the other accusation, Obama denies knowing about the scandal until last Wednesday. Critics say this investigation has been going on for months, but has been withheld from the public until after the election.

In February the FBI discovered that Petraeus’s computer had been accessed by his 40-year-old mistress; they also discovered hundreds of sexually explicit emails between the two.


These details came up later after what began as a cyber-harassment probe against Petraeus that ended just 4-days before the election. In light of this, the latest revelations coincidentally came to light just after the elections, officials say. The Director of National Intelligence James Clapper wasn’t told about the probe until Nov. 6, Election Day.