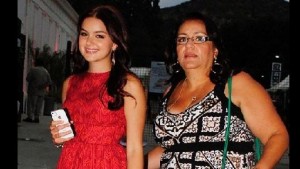 There’s been some drama off the screen for “Modern Family” 14-year-old actress Ariel Winter. A judge has awarded temporary custody of the actress to her older sister Shanelle Gray. Chris Workman, her mother, is charged with physical and emotional abuse — including slapping.

“It’s all untrue, it’s all untrue,” her mother told People magazine. “I have my doctor’s letter that my daughter has never been abused.”

Her sister’s petition accuses their mother of “vile name calling, personal insults about [her and her weight], attempts to sexualize minor, deprivation of food, etc. for extended period of time.’


Gray will hold guardianship until November 20, when a hearing will decide the teen’s future.

The actress of the Emmy-winning TV comedy has been accused of seeking to free herself from her mother to be with her boyfriend, but TMZ shot that down. TMZ also notes that Ariel’s older sister, Shanelle Grey, was herself abused by the mother, and was removed from the home and put into foster care for more than two years.

An independent attorney has been appointed for Winter. Attorneys have attempted to transfer access of her account to a different guardian, to block her mother’s access, but the judge denied the request.