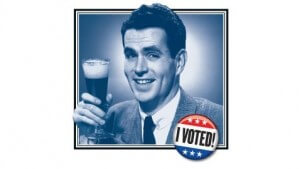 After Friday’s test, college students could count on having a beer afterwards, to celebrate passing it, or to ease the depression of bombing it. The same logic might apply to Election Day, which has the country charged with fervor, and overwhelmed by every manner of advertising we’ve been hit with: wouldn’t it be nice to knock back a Guinness if your candidate won, or on the other hand, knock back a Guinness if your candidate lost? Well if you are in Kentucky or South Carolina, you’re SOL: they’ve banned alcohol on Election Day.

Idaho, Indiana, Utah, and West Virginia once had a similar laws. As the Distilled Spirits Council of the United States (DISCUS) explains, “the Election Day sales ban is a relic of the prohibition era when saloons sometimes served as polling stations,” their vice president Ben Jenkins explained. “Repealing the ban on Election Day alcohol sales would prove consumers with a much-needed convenience — whether they’re celebrating election returns or mourning them.”

Kentucky might squash the old law, but not South Carolina. They’re sticking to it. Their law makes it clear that “It is unlawful to sell alcoholic liquors on Sunday except as authorized by law, on statewide election days, or during periods proclaimed by the Governor in the interest of law and order or public morals and decorum.”