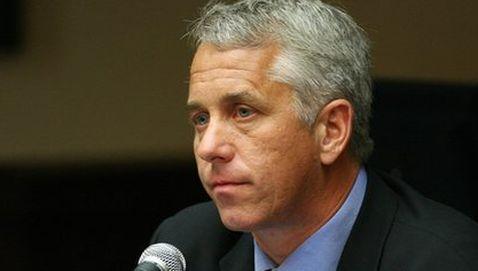 Greg LeMond, a three-time winner of the Tour de France, has said that the leaders of cycling’s governing body should resign after the Lance Armstrong doping case because he claims they are “the corrupt part of the sport.” On Wednesday night, LeMond published an open letter on his Facebook page that requested people who care about the sport of cycling to tell the International Cycling Union President Pat McQuaid and honorary president Hein Verbruggen to resign from their posts.

Verbruggen was the head of the UCI from 1991-2005, right during the era that Armstrong dominated the sport, winning his seven straight Tour de France titles. LeMond won the Tour de France in 1986, 1989 and 1990. He said that corruption, not drugs, is the problem for cycling right now.


“Pat in my opinion you and Hein are the corrupt part of the sport,” LeMond said. McQuaid, who is in his second term as UCI president, said that he does not plan to resign. His term ends in September.

“I believe that there are many, maybe most that work at the UCI that are dedicated to cycling, they do it out of the love of the sport, but you and your buddy Hein have destroyed the sport,” LeMond said. “You know … well what has been going on in cycling, and if you want to deny it, then even more reasons why those who love cycling need to demand that you resign.”

Pedro Delgado, the Tour de France winner in 1988, also backed LeMond with his allegations. He posted the following on Twitter, “Totally agree with my ex-rival Lemond.” The UCI has been accused of corruption in the past by 2006 Tour de France winner Floyd Landis, who was stripped of his title for allegations of doping. The UCI filed a defamation lawsuit against Landis. Paul Kimmage, an Irish journalist and Tour de France competitor during LeMond’s time also accused UCI of corruption. He was also hit with a defamation suit.


“This is about a journalist who accused me, and my predecessor and the UCI of being corrupt. It’s a straightforward defamation case,” McQuaid said Monday during a news conference about Armstrong’s sanctions.

LeMond has supported the legal fight of Kimmage and there has been a defense fund created by two cycling websites that has raised over $73,000 to pay the legal fees of Kimmage.


“I would encourage anyone that loves cycling to donate and support Paul in his fight against Pat and Hein and the UCI,” LeMond wrote. “I donated money for Paul’s defense, and I am willing to donate a lot more, but I would like to use it to lobby for dramatic change in cycling. The sport does not need Pat McQuaid or Hein Verbruggen.”