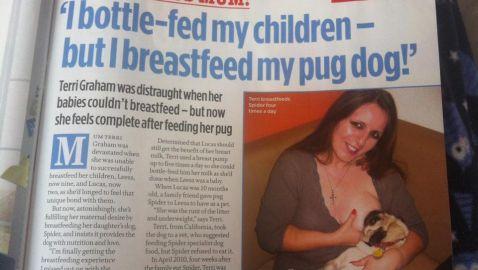 A woman named Terri Graham has found a way to fulfill her maternal instincts and desires by breastfeeding her daughter’s dog, Spider. Graham is a mother of two but she was not able to breastfeed her children. Now that she can, she has begun breastfeeding the family Pug.

Graham was interviewed by the United Kingdom version of the magazine Closer on October 20. Graham, 44, said that she is considered a ‘freak’ by some but she said the breastfeeding provides nourishment for the dog and helps her feel like a better mother.


“Having Spider suckle on my boob means I finally feel complete and a better mother,” Graham said to the magazine.

Graham hails from California and claims that the dog started to enjoy breast milk back in 2010 after it licked a bottle’s nipple that Graham pumped for her newborn son at the time. Graham said she has been breastfeeding the Pug for two years now.

There was a picture from the magazine article that was posted to a forum on Reddit dedicated to outrageous and strange news. The photo received 2,000 ‘upvotes’ almost immediately and it was featured on the site’s homepage. Most of the comments for the photo were jokes but there were some serious ones. Also interviewed by the magazine for the article was a psychologist, who said that Graham should get therapy.