Got a tip?
Home » Legal News » Jerry Sandusky Sentenced; 30 to 60 Years in Prison 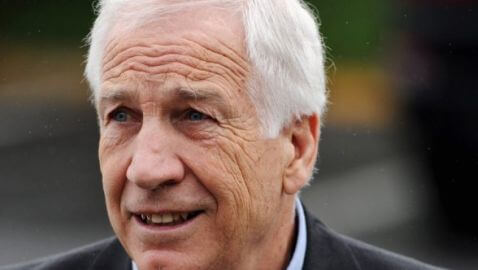 In what is effectively a life sentence, former Penn State assistant football coach Jerry Sandusky was issued at least 30 years in prison for his child sexual abuse charges. The sentencing took place on Tuesday after Sandusky issued a statement in which he denied the charges against him. Sandusky is 68 and will not be eligible for parole until he is 98.

Sandusky was convicted in June on 45 counts of child sexual abuse. According to witnesses, Sandusky used his charity organization for troubled children as his way of meeting his victims. On Monday, Penn State Com Radio aired a statement made by Sandusky. Sandusky claims that he is the victim of investigators and Penn State.

The sentence was handed down by Judge John Cleland, who issued a sentence of 30 to 60 years. According to Pennsylvania law, Sandusky cannot be released from prison on parole until he serves the minimum, which is 30 years.