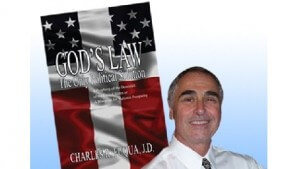 Some people vote for candidates who support their principles and convictions. Perhaps others vote for entertainment purposes, choosing the most colorful personality, and if that is true, Charlie Fuqua is a shoo-in. The Republican candidate from Arkansas has written a book, God’s Law, the Only Political Solution, which has the guts to say it like it is — or at least to say it like it was in ancient Israel: we need to legislate the death penalty for rebellious children.

The Hebrew Bible, after all, mandates the procedure for offing your awful children, and if Jesus meant it that “he who denies the least of these laws will be called least in the kingdom of heaven,” surely that law is a glaring omission from U.S. legal practice. Only Fuqua, like so many fundamentalists who want to resurrect this or that Mosaic law, cherry picks. They might still wear clothing made from more than one material — though Mosaic Law forbids this (Leviticus 19:19) , and if they suspect their spouse of infidelity, they are unlikely to feed her poison for God decide the matter by letting her survive if she is innocent (a trial called “Sotah,” Numbers 5:11-31), nor will they stone to death any woman found not to be a virgin on her wedding night (Deuteronomy 13-21). Nevertheless, it is often quoted that the Law calls homosexuality an “abomination,” (as is a woman dressed in man’s clothes 22:5), and it is interesting what particular verse an inspired fundamentalist will happen to latch on to.

Fuqua, a former lawmaker and anti-abortionist, chose capitol punishment of children. His book details his view:


The maintenance of civil order in society rests on the foundation of family discipline. Therefore, a child who disrespects his parents must be permanently removed from society in a way that gives an example to all other children of the importance of respect for parents.

(There seem to be some logical steps missing between the premise and the “therefore.”)


This passage does not give parents blanket authority to kill their children. They must follow the proper procedure in order to have the death penalty executed against their children. I cannot think of one instance in the Scripture where parents had their child put to death. Why is this so? Other than the love Christ has for us, there is no greater love then [sic] that of a parent for their child. The last people who would want to see a child put to death would be the parents of the child. Even so, the Scripture provides a safe guard to protect children from parents who would wrongly exercise the death penalty against them.


Parents are required to bring their children to the gate of the city. The gate of the city was the place where the elders of the city met and made judicial pronouncements. In other words, the parents were required to take their children to a court of law and lay out their case before the proper judicial authority, and let the judicial authority determine if the child should be put to death. I know of many cases of rebellious children, however, I cannot think of one case where I believe that a parent had given up on their child to the point that they would have taken their child to a court of law and asked the court to rule that the child be put to death. Even though this procedure would rarely be used, if it were the law of land, it would give parents authority.

(What sort of parent must resort to the death penalty to assert their authority?)

Children would know that their parents had authority and it would be a tremendous incentive for children to give proper respect to their parents.

(The equating of “respect” and “terror” is an Old Testament relic).

He apparently thinks disrespecting parents is a serious offense and endemic problem in the U.S. Indeed, the ten commandments made respecting your parents a top law, while leaving out “Thou Shalt Not Rape,” but this isn’t ancient Israel, and America values individuality, not conformity.

Yet conformity is what Fuqua is after. For instance, he wants to oust the Muslims — simply deport them all from the U.S. “There is a strange alliance between the liberal left and the Muslim religion. It may be that since both are the enemies of Christianity, that they both believe that, my enemy’s enemy is my friend,” Fuqua writes. “However there are several similarities between the two. Both are antichrist in that they both deny that Jesus is God in the flesh of man, and the savior of mankind. They both also hold that their cause should take over the entire world through violent, bloody, revolution.”

Whether he has liberals pegged with this last sentence — don’t they all simply want to watch the world burn? — the talk is entirely theocratic, and hence anti-American. Not that he realizes this. As he says:

“I think my views are fairly well-accepted by most people.”