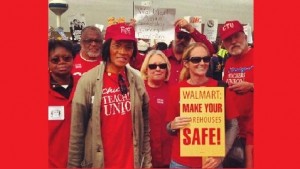 Police intervened when a peaceful protest of 650 disaffected Wal-Mart Workers continued their strike in Elwood Illinois, this Monday. Wal-Mart’s empire is built on the backs on such low-paid workers, many who are outsourced and given contract work that leaves Wal-Mart the prerogative when and if they work on any given day. As Warehouse Workers for Justice says on their website:

No one should come to work and endure extreme temperatures, inhale dust and chemical residue, and lift thousands of boxes weighing up to 250lbs with no support. Workers never know how long the work day will be- sometimes its two hours, sometimes its 16 hours. Injuries are common, as is discrimination against women and illegal retaliation against workers who speak up for better treatment.

For sitting on the road near the warehouse entrance, the riot squad came, dressed as if they were prepared for guerilla warfare, and arresting 17 people, strapping them in zip-ties.


The worker’s concerns seem to be legitimate and are given credence by such recent reports as the National Employment Law Project which reveals that the contractors pay low wages for difficult work, violating labor laws in the process.

This group of protesters has been striking since mid-September. Whether or not their rally gets called an “unlawful assembly,” the purity of their aims will hopefully keep them to their task.