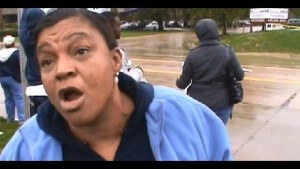 What constitutes an ethical use of an example of what you oppose? When a viral video of a black woman explaining her support for President Barack Obama is based on his giving her a free cell phone, and the Drudge, a conservative news source, shared it on its homepage, and Rush Limbaugh repeatedly played it on his program, is it unfair to use this woman as an example of what they oppose because she fits certain racial stereotypes?

Her missing teeth, hefty weight, dialect, yelling, and of course her race strike some reviewers of the video and its eager distribution by certain conservatives, as motivated by racism. But when somebody has a political agenda and is opposed to a certain mindset and attitude, what examples is he or she allowed to use? Looking for a white example of such a mindset might bring its own stereotypes, such as if she were a single mother, or mentally ill, or something else that would disqualify her from being a politically neutral example of the mindset one opposes.

The woman in question was interviewed as asking why she was protesting. “Everybody in Cleveland, all the minorities got a phone. Keep Obama president, you know, he gave us a phone, and he’ll give us more.”


The video is being used by some conservative voices on the web as a characterization of the “47 percent” that Romney referred to at a private fund-raiser that was later ousted to the public:

Romney brought up this 47 percent as an example of who his message could not reach those he regards it futile for him to reach out to.


The phone program, for the record, isn’t an Obama initiative, not fully. It is a program of the Federal Communications Commissions entitled Lifeline that began in 1984 under Reagan and in its latest manifestation taxes the public indirectly through their phone bills.

Whether or not distribution of the film is fair and just, it works to solidify the opposition in the minds of many conservatives — the sort of simplification which is all too appealing to every party, given how complex political issues actually are.