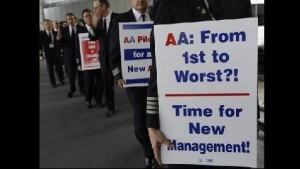 American Airlines has sent a litigious letter to its pilot’s union late Wednesday claiming that if the pilots didn’t cease their sick-out, and bring the union to smooth operation, they would seek legal action.

The Airlines have this right. After this unit of AMR Corp. filed for bankruptcy in November, the U.S. bankruptcy judge ruled that they could cease collective bargaining with the pilot union.

American sued the pilot’s union in 1999 for a sickout — a staged set of call-ins designed to disrupt flights — and won $45 million. In 2008 a judge ordered the union to cease another sickout determined to be illegal and just last September a federal judge called an end for a work slowdown.


They have 75,000 active pilots who after American filed for bankruptcy were given new pay, benefit, and work rules last month.

“Within 24 hours of being asked to return to the bargaining table they essentially take a baseball bat to the side of our heads and threaten legal action,” Hoban said. “It’s a sucker punch.”


If there is no coordinated sickout or slowdown, it looks otherwise to American. Their on-time record dipped below 50 percent last week, and call-ins for sickness are up 20 percent from last year. Maintenance checks have doubled this September.

“We do not want to pursue a legal remedy, but we will be left with little alternative if Allied Pilots Association (APA) does not take action to stop those pilots who are intentionally harming the operation,” said American’s letter.