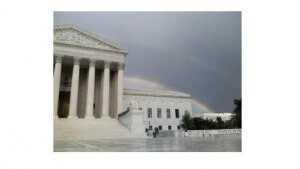 The Supreme Court on Monday privately discussed the prospects of handling two same-sex marriage disputes, one seeking to appeal 1996’s DOMA (Defense of Marriage Act), and the other to question whether California has invalidated U.S. Constitutional Law in banning same-sex marriage. As of Tuesday, they have omitted the challenges. On Oct 1 they will release a list of the cases they are not going to consider, and that would clinch the issue, leaving the rulings in tact from previous lower courts, or perhaps postponing them till after the presidential election.

The California case goes by the name of Proposition 8. California is the only state to have legalized and then later banned same-sex marriage. It made the ban after 52 percent of a statewide ballot ruled against it — 18,000 gay and lesbian marriages had already taken place. There is no greater motivator than frustration, so this has led the dispute higher and higher, reaching finally the Supreme Court.

The DOMA appeal, on the other hand, questions the constitutionality DOMA which mandates that federal courts not recognize any marriage except those between one man and one woman. The case in hand regards Edith Windsor and Thea Spyer of New York City who married out of state in 2007, which was not recognized by the federal government or, at the time, New York. When Spyer died, Windsor was expected to pay $363,000 in taxes that a heterosexual spouse would not be expected to pay. The case is being rushes, as Windsor is an old woman.


“Edie Windsor, who recently celebrated her 83 birthday, suffers from a serious heart condition,” said her attorney, Roberta Kaplan. “Edie cannot yet receive a refund of the unconstitutional estate tax that she was forced to pay simply for being gay. The constitutional injury inflicted on Edie should be remedied within her lifetime.”

As of now, six states recognized same-sex marriages: Massachusetts, New York, Iowa, Connecticut, Vermont, and New Hampshire. Problems naturally arise when state laws don’t square with federal laws, or the laws of other states. The Supreme Court’s judgments in such cases could clear up the ambiguities, but we won’t know for certain if they are taking any of them until Oct. 1.