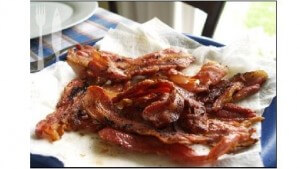 There’s a simple chain of cause and effect that could upset your breakfast for a whole year: world droughts deplete grain crops; less maize and grain increases the costs of livestock feed; more expensive feed means farmers can afford fewer pigs; in 2013, bacon becomes too expensive to afford. What some have seen as certain evidence of a 2012 end of the world isn’t as bad in the U.S. as it is in Europe and Russia. It is estimated that bacon and pork products will costs 8 to 10 percent more in the next year to cover for the 3 percent of pigs that have to be pared down these next few months.

In England, it’s worse. They had to pare down 10 percent of their pig population, which amounts to perhaps double the cost of pork products.

U.K.’s National Pig Association warns that “World shortage of pork and bacon next year is unavoidable.”


In a press release, they clarified their concern: “New data shows the European Union pig herd is declining at a significant rate, and this is a trend that is being mirrored around the world. Pig farmers have been plunged into loss by high pig-feed costs, caused by the global failure of maize and soya harvests. All main European pig-producing countries report shrinking sow herds.”

The interconnected web of global interrelations thus converts drought into worse breakfasts for the poor. “Anytime you drive up retail prices — beef, pork, chicken, turkey, eggs, milk … it falls on people with low incomes and fixed incomes, the people who can’t afford it,” said Steve Meyer, the president of Paragon economics and a consultant to the pork industry.

The government has attempted to offset the cost of the bacon shortage by purchasing $100 million in pork products for schools and the military, but Meyer thinks this will do little to assuage the industry’s ache.


When an economy is pushed past its buffer zone and lacks proper cushioning, such inevitable emergencies such as nationwide drought become harder to handle. As the economy perks up, we will be as usual better equipped to counter-balance such things.