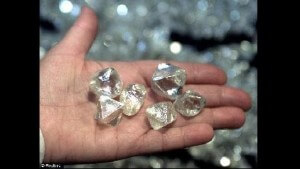 History is full of quirks. The “promised land” regions of the middle east, which was less milk and honey than sand and desert, turned out to have large deposits of oil underneath it, and now in the barren region of Eastern Siberia, a country known for its penal colonies, it has been revealed that Soviets in the 1970s discovered a 35-million-year-old 62-mile diameter asteroid crater. This is the motherload, more diamonds than anybody dreamed of — ten times as many as we now have.

“The reserves of super hard diamonds contained in rocks of the Popigai crypto-explosion structure are, by a factor of 10, bigger than the world’s all known reserves,” said Mr. Pokhilenko. “We are speaking of trillions of carats. By comparison, present-day known reserves in Yakutia are estimated at 1 billion carats.”

The Yakutia mines were the reason Russian scientists were barred from revealing the secret — Russia didn’t want to upset operations there, which were already dominating the market. The new megaload was simply left to rest.


The new diamonds were either present in the meteorite to begin with, or created by high impact of the meteorite with graphite deposits. Whether they are “impact diamonds” or “space diamonds,” they are twice as hard as regular diamonds, making them especially ideal for the growing market of industrial diamonds for scientific cutting and industrial use.

It is projected that this mine could dominate the diamond market for the next 3,000 year.